All About the Yatai

There are six festival teams in Izawa-cho. Each group has one large and one small Yatai, for a total of 12 Yatai. Each group also has a garage for their Yatai.

The design of the upper part of the Yatai is made up of beams, cross beams, “kashiranuki” which connect the Yatai’s columns at their tops, and ridgepoles. Foxglove tree oil is painted on the roof and eaves.

Yatai are decorated with curtains and Chochin lanterns, and the neighborhood flag attached to the roofs of the small Yatai of each of the six teams were all originally inscribed by the wealthy merchant Takegawa Chikusai. The name of each team is stitched on the flag in golden characters.

The splendor of the Yatai’s many colors and the elegance which emerges in the light of its Chochin lanterns continues to captivate countless people today, just as it did in the past. 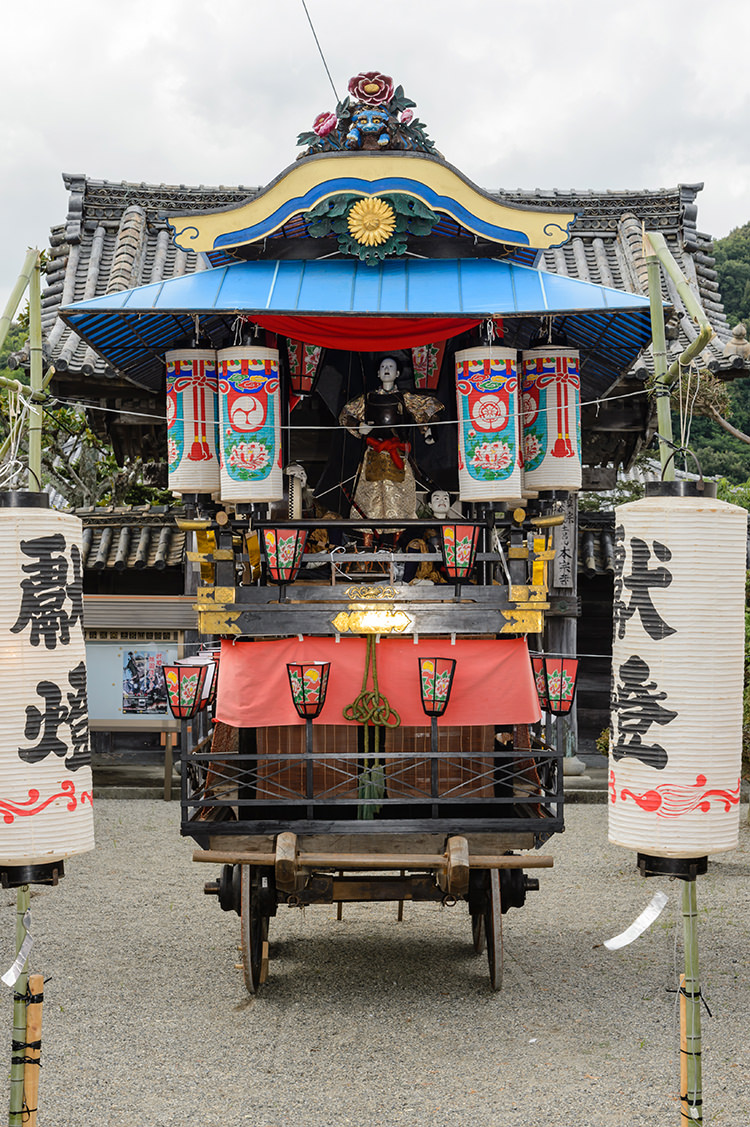 The pattern on the ridge-end tile (Oniita) is a Japanese peony flower, and the pattern below it is a chrysanthemum. The three dolls which stand side by side are the Empress JINGU, the Emperor OHJIN, and their loyal retainer Takenouchi Sukune.

An image of Mt. Fuji with a dragon covers the rear over tapestry (Miokuri-maku). The ridge-end tile of the small Yatai has a lion pattern, and a chrysanthemum pattern. 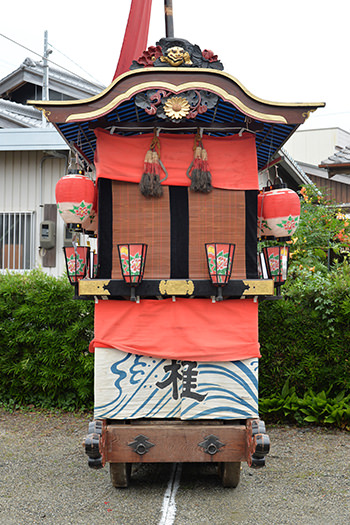 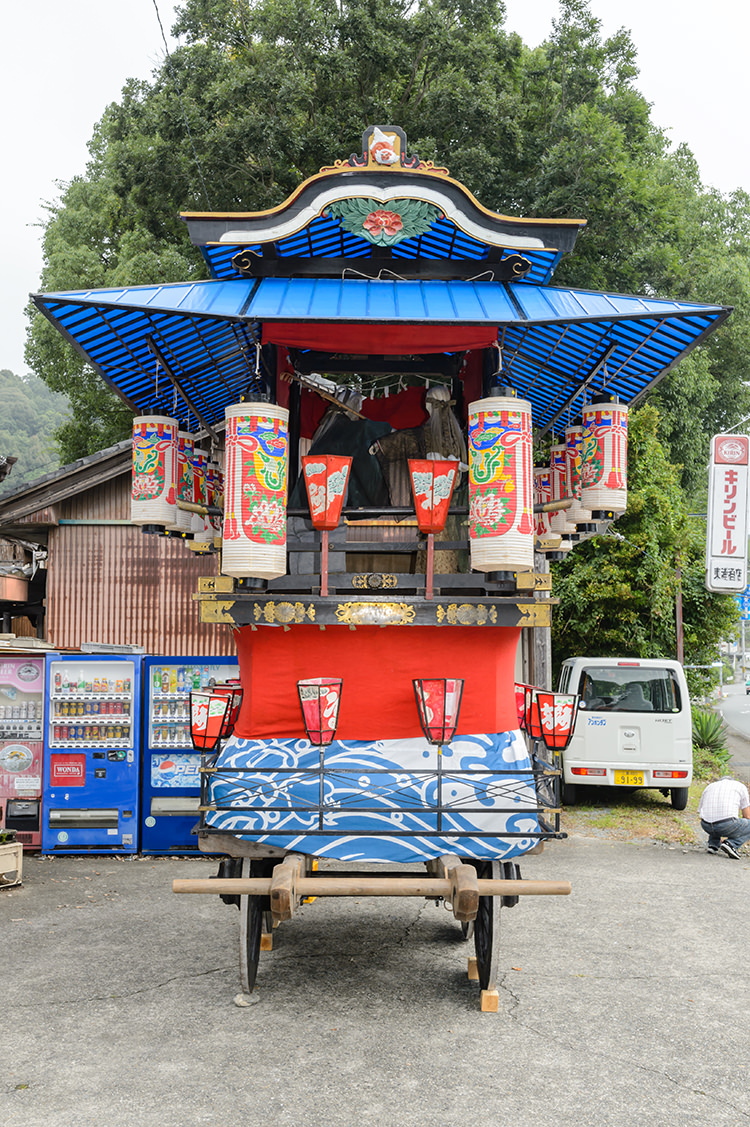 This large Yatai was constructed in June of 1843. Its ridge-end tile has a Chinese lion pattern, and there is a Japanese peony below it. The old man and woman dressed in Noh costumes symbolize the marital harmony and longevity of an elderly couple. The design on the Domaku, or front curtain, is ocean waves with the image of a plover bird, and the rear over tapestry’s image is an elderly couple. The ridge-end tile of the small Yatai has a lion pattern, and a chrysanthemum pattern 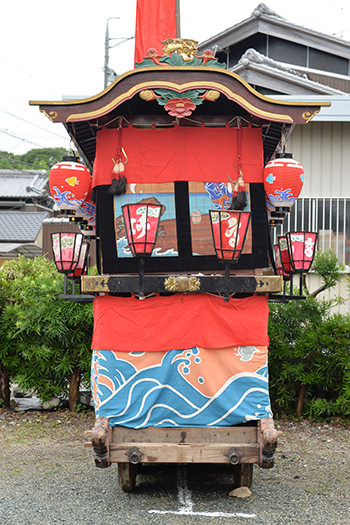 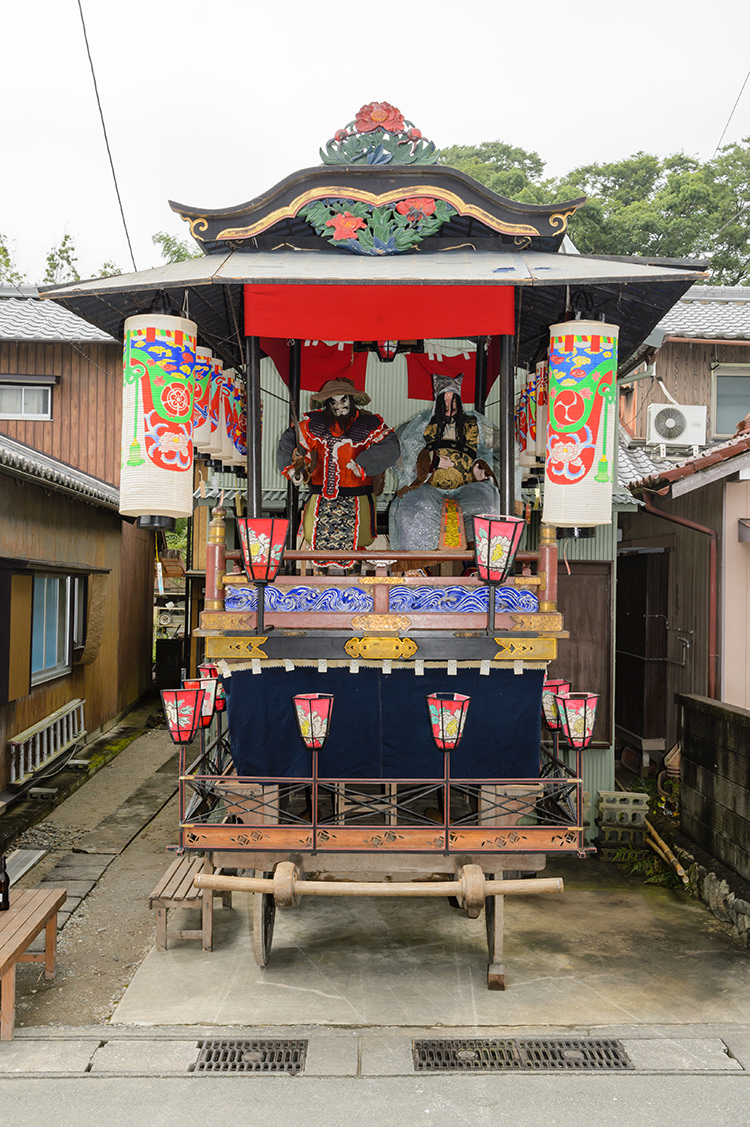 This large Yatai was constructed around 1780–1781 and is the oldest in Izawa-cho.

The ridge-end tile is decorated with red peony, and the rear over tapestry’s paired peony hangs on the gable board, or Hafuita. The dolls inside this Yatai are Kanu and Chohi, two characters who appear in the Chinese historical novel Romance of the Three Kingdoms. These two dolls are believed to be the oldest used in the festival. The ridge-end tile of this small Yatai has a lion pattern, and a chrysanthemum pattern. 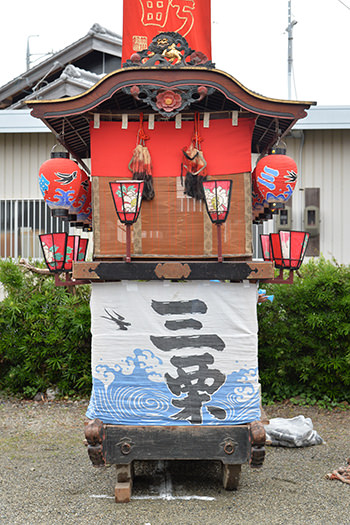 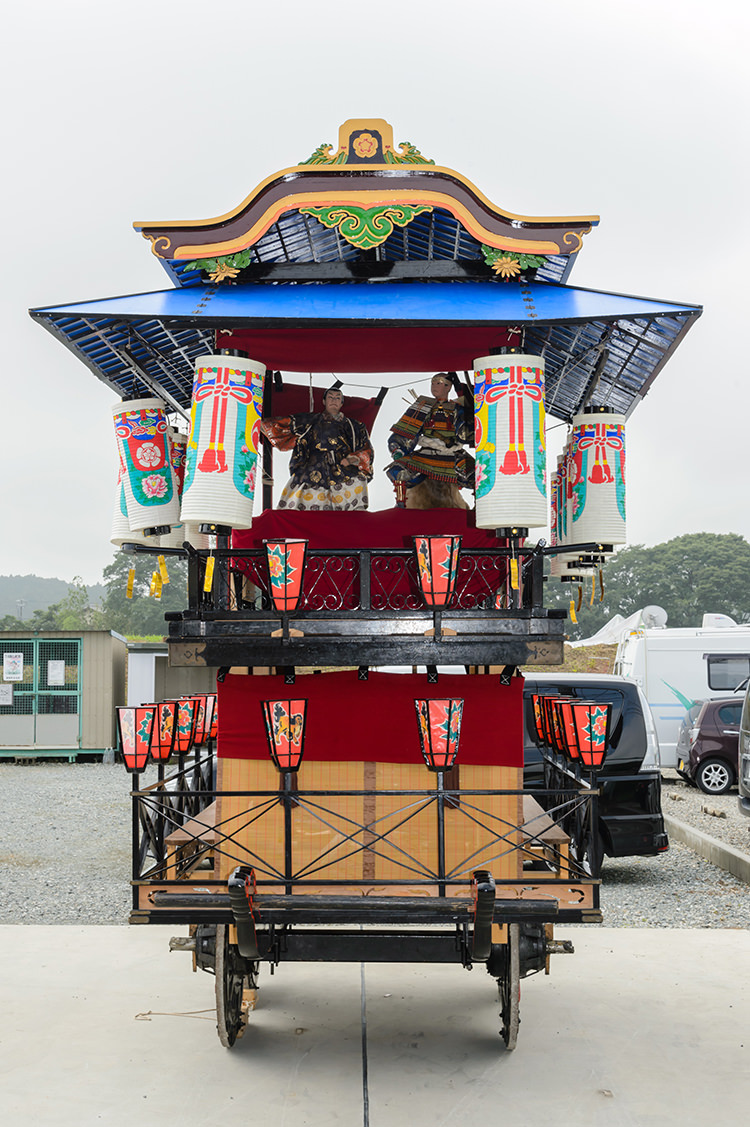 This large Yatai was constructed in the last years of the Edo period. Its ridge-end tile has a pattern of melons with Chinese bellflower and below is a vivid green wormwood pattern with flowers.

Inside it is decorated with the doll of a warrior and a pine tree.
Its front curtain has the word “YAKUMO” written in bold red letters against a blue background.

The ridge-end tile of this small float has a pattern of five melons with Chinese bellflower surrounded by spirit clouds. 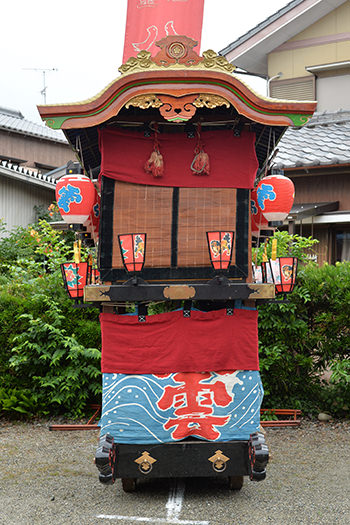 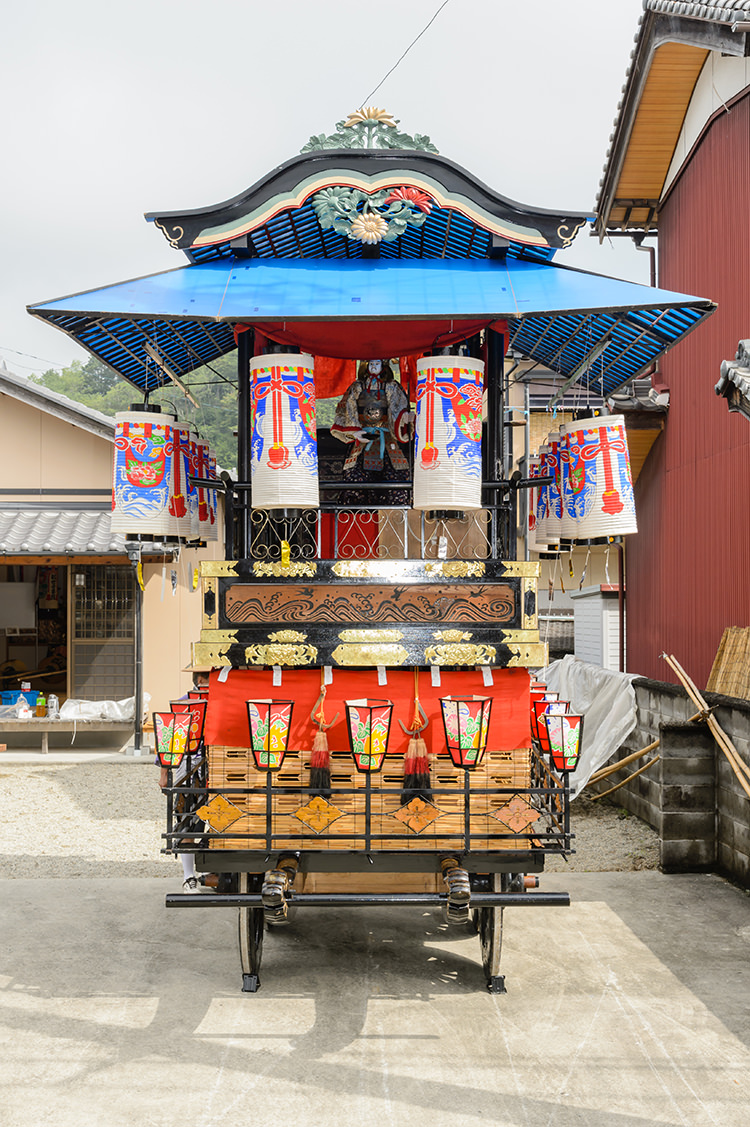 This large Yatai was constructed around 1810.
Its ridge-end tile and decorative board are treated with chrysanthemums. A warrior doll stands guard inside.
Its rear over tapestry is a goblin style Dutch printed cotton tapestry with flowering plant pattern.
Its handrail is fashioned in a decorative window style adorned with a wave and plover openwork carving pattern.
This small Yatai was made in 1926. Its ridge-end tile sports a lion, and its decorative board is ornamented with peony. 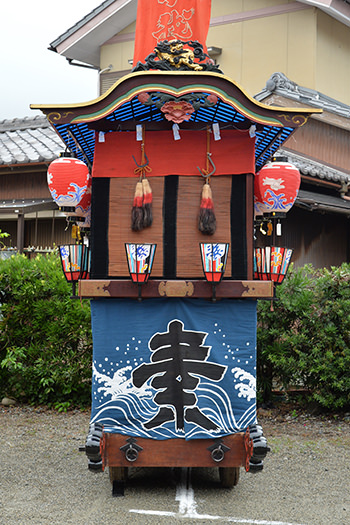 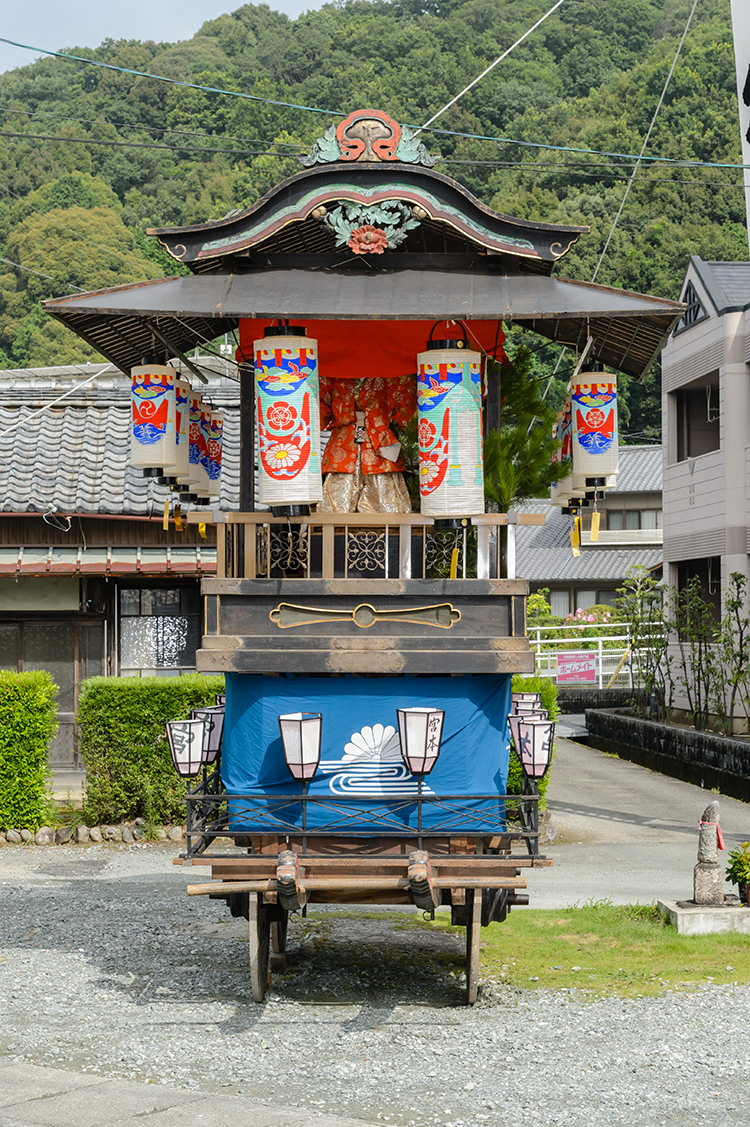 This large Yatai was made in 1857. It is decorated with Japanese armor, helmets and warrior dolls, and to their rear are additional warrior dolls and a pine tree, which seem to turn this Yatai into a KABUKI stage.  Its ridge-end tile is patterned with inlaid work, below is peony.

Its front curtain has the word “YAKUMO” written in bold red letters. The ridge-end tile of this small Yatai has patterned chrysanthemum, and the board flaunts a flowing water pattern with chrysanthemums (Kikusui). The date 1874 is written in black ink on the underside of the floor board of the upper deck. 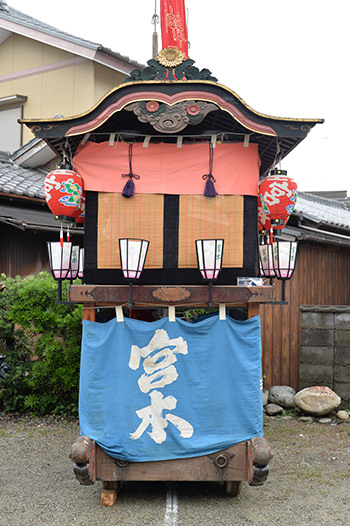